Lee Sachs on how it’s almost 2020 and we still don’t have our jet packs. His 18-year-old-self would be livid.

In 1996 I got a job at a dotcom place in New York City’s “Silicon Alley.” You know, California has Silicon Valley — valley’s connoting rolling hills and redwood forests — and New York has alleys where crackheads get shot.

This was my first full-time job and I was really looking forward to healthcare that covered me, my wife and young son. My good feeling was trashed on my first day when I learned healthcare will cost me $1,500/month. Up to that point, the company threw $150 towards everybody’s health plan, which cut it in half for all those dotcom punks who weren’t married, had no children but lived with 3 roommates and a bong on the coffee table next to the Playstation controllers.

And … that was the LAST time I told anyone my age at work.

Now here I am, writing an article that pretty much tells the world my age. (At least the part of the world that can do basic addition.) But like yeah, whatEVer man … it ain’t a thing.

Age in life can be interpreted many ways, but your age at work must correlate to salary and material goods. There are standards: younger people get junior jobs; older people get big titles and offices with a lotta furniture. We learn this early. Six years old, it’s first grade; 12 you’re in 6th and so on. But then there was Mike Mazalli, aka Mikey Meat. He was 16 in 8th grade. Sure he was left back a few times, but he drove to school … and he did have that sick Camaro and smoked Marlboro’s.

Yeah, the numbers and material things don’t always add up to expectations. And probably, when we’re younger we haven’t learned all this. When I was 26, what did I think I’d be doing at this point in my life? What did I think the world would be like?

Dig it. It’s almost 2020 and we still don’t have our jet packs! My 18-year old self would be livid. The jet pack WAS the future. Am I disappointed? Not at all. My only regret is that, back then, nobody thought to speak up and say: “Hey, so, this jet pack? Can’t carry enough fuel. Sorry … never gonna work.”

‘Working in computers’ in my mind 40 some years ago conjured images of those giant reel-to-reel machines, blinking lights, and men in white short-sleeved shirts with clipboards. I wasn’t thinking ‘in the future’ I’d be sitting on a stability ball in a Soho loft in front of a small screen connected to the cloud, using my work hours to sneak in satirical pieces about ‘working in computers.’

For me today, I’ve managed to carve out a role as a consultant, contracting from job to job in tech. I’m a hired gun with no corporate ladder to climb. It’s more like swinging from vine to vine … which has its own problems.

Yeah, there’s money problems. Last time I checked, everybody’s got that problem in one way or another. So I work in writing and performing, thumbing my nose at my 18-year-old self that foretold “When I’m 50 years old I’ll be zipping around in a jet pack on my private island comprised of huge mountains of cold, green cash.”

Gimme a laptop and a cube and I’ll thumb my nose at the elders in their offices with their couches and credenzas. (I don’t even have one in my house. Is a credenza the one with shelves? I have a bookcase … is that a credenza?)

Lemme play in the gray area in between. Find me out in the cube farm with the young ones while the olds swing by to query me about geeky stuff they can’t begin to understand.

But I have to be careful.

When people reminisce about their big, clunky Windows 95 machine in college, that is not the time to say, “Oh man … ya shoulda seen the typewriter I had in my dorm!” 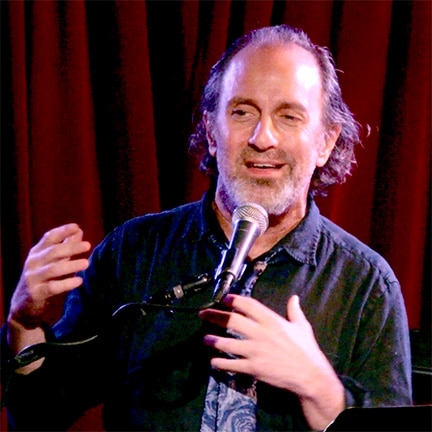 Lee Sachs is a writer/performer who has done solo and group shows at venues like Dixon Place, Spoke The Hub, The Duplex and many other venues around NYC.  His writing can be seen in McSweeney’s, The American Bystander and Points In Case.  He also spends far too much time consulting in User Experience for clients like Verizon, Starwood Hotels, Avis and others.  www.coolpillows.com.