Created by AGEIST for

Studies show that fisetin, a powerful senolytic found in strawberries, may have positive impacts on our health and longevity. 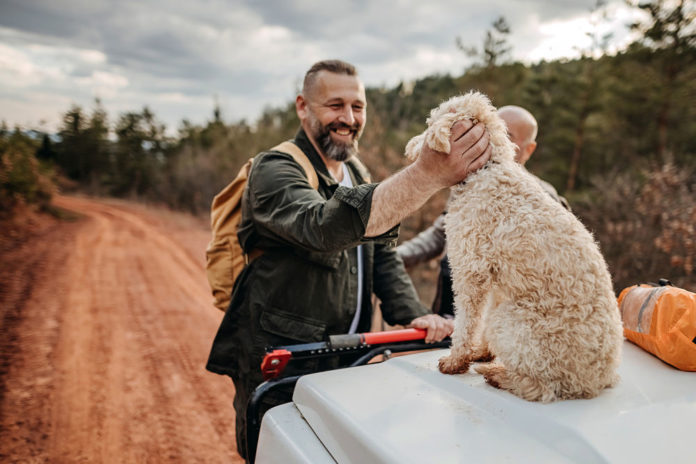 You’ve heard the adage, “an apple a day keeps the doctor away,” but, in reality, it may be strawberries. For years, researchers have been studying fisetin, a plant compound found in strawberries, for its capacity to act as an antioxidant and reduce inflammation in the body. However, in more recent years, scientists have discovered it also works to extend lifespan. Various culture and animal studies demonstrate fisetin’s range of positive health effects, including its role as an antioxidant, senolytic (an agent that induces cell death in senescent or unhealthy cells), and its ability to mimic calorie restriction. Let’s examine where the current science stands on this health-boosting longevity compound.

What is fisetin and what role does it play in longevity?

Aging expert and professor Paul D. Robbins and a team of scientists examined fisetin’s effects on aging and longevity in rodents. They found that mice exposed to fisetin lived 10% longer and experienced fewer age-related issues than the control group, even at an older age.[1] These promising results drove the Mayo Clinic to sponsor a clinical trial examining the direct effects of fisetin supplementation on age-related dysfunction in humans.[2]

Another prominent scientist Dr. Maher, PhD, also discovered impressive findings, especially fisetin’s impact on the brain. Her research in mice illustrated fisetin’s neuroprotective and memory-enhancing properties.[3] One particular study included mice with Huntington’s Disease (HD), an inherited disease that damages and destroys neurons in the brain. Mice with HD that were fed fisetin experienced a delayed onset of motor defects and lived 30% longer.[4] Fisetin’s unique characteristics, including its ability to act as a senolytic, antioxidant, and mimic calorie restriction, potentially explain these findings. 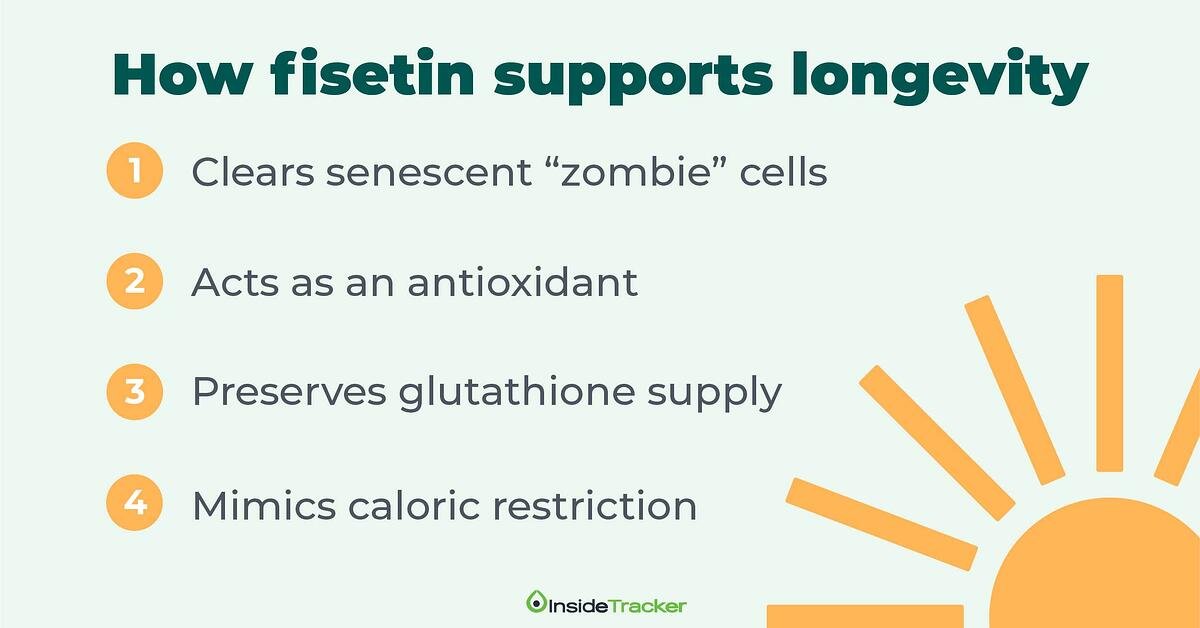 Fisetin acts as a senolytic to extend lifespan

Scientists believe cell senescence contributes to aging. Senescent cells are old cells with damaged DNA that have lost their ability to divide. Also known as “zombie cells,” senescent cells do not die; they accumulate and inflame surrounding cells and tissues. Cellular senescence gradually weakens an organism by making it more susceptible to age-related diseases. Cellular senescence can contribute to the gradual deterioration of an organism and advance many age-related diseases.

Senolytics, on the other hand, are compounds that eradicate senescent cells, helping to prevent age-related disease and even mitigate those that may have already developed. Studies show that fisetin is a very powerful senolytic, especially compared to other flavonoids. A study from the journal Aging found that fisetin significantly removed senescent cells when applied to human umbilical vein endothelial cells. Compared to other plant-derived senolytics, like quercetin (a flavonoid prevalent in onions), fisetin is most effective at destroying senescent cells in animal models and human cell cultures.[5]

Fisetin’s role as an antioxidant

Oxidative stress, another contributor to the aging process, develops from an imbalance between free radicals and antioxidants in the body. Free radicals potentially damage cells, proteins, and DNA, while antioxidants help neutralize and minimize their harmful effects. Fisetin works as an antioxidant by protecting cells from free radical damage.[6] It also exhibits anti-inflammatory properties by turning off pathways that promote inflammation and decreasing the production of inflammatory compounds.[7]

Glutathione, a powerful antioxidant, helps to protect our cells from oxidative stress and helps ward off aging-related diseases.[8] As we age, our supply of glutathione declines. But maintaining adequate glutathione levels is crucial as low levels are linked to a higher incidence of cancer, diabetes, and heart disease.[8] Research indicates that fisetin may help preserve the body’s supply of glutathione.[9] 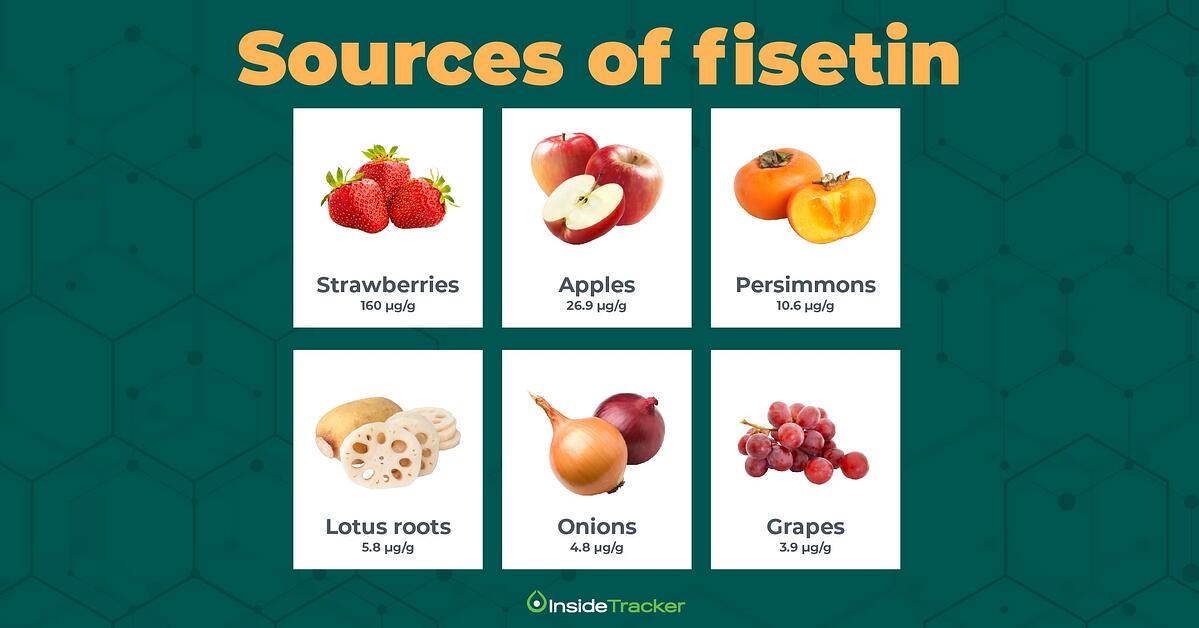 It’s widely accepted among the scientific community that calorie restriction — a 10-40% reduction in overall caloric intake — leads to improved health and longevity.[10] It does this through various mechanisms, including activating sirtuins (proteins involved in cellular health), promoting autophagy (a form of cellular housekeeping), and increasing AMPK (an enzyme involved in cellular metabolism) activity. Research suggests that fisetin elicits a similar response as calorie restriction, initiating these three pathways as well. Moreover, the activity of these pathways declines with age, but mice models show that fisetin can boost their activity, keeping the cells youthful.[11]

How can humans reap the benefits of fisetin?

Fisetin positively impacts health and longevity, especially in mice. There are still many questions that need answers, including whether these findings will translate from animals to humans, and what a safe dosage of fisetin is for humans. A handful of clinical trials are currently underway administering ~20mg/kg of fisetin to their study subjects.[2] In the meantime, consume lots of strawberries to recap the benefits of this promising compound.

Save 25% on all InsideTracker products: http://www.insidetracker.com/ageist
Check out The SuperAge Podcast with InsideTracker dietitian Ashley Reaver “What to Eat and When to Eat It”

Why WHOOP Is Our Favorite Wearable

RewildRestore: In the Spell of Keros